The relationship between supply and demand is widely understood in economics. But does an aging America mean future stock returns will be lower as older Americans sell stocks for day-to-day needs in retirement?

Most economists I’ve spoken with on the matter in recent years have expressed concern about this very dynamic. It’s also a rational, simple explanation for several things. But while supply and demand are still present forces, this thesis makes a number of implied assumptions. The foremost being that baby boomers will be the only supplier of savings (capital) to the productive businesses that need it (in the form of stock purchases in the primary/secondary markets).

Vanguard Group, Inc. has just published their own study on the matter, titled Baby Boomers and Equity Returns and dives into this very topic. Over the next 12 years the U.S. population will be more uniformly distributed by age than in the past. This also means more individuals that are near or in retirement than at any point in the the country’s history. Figure 1, provided by Vanguard using data from the U.S. Census, illustrates this well. 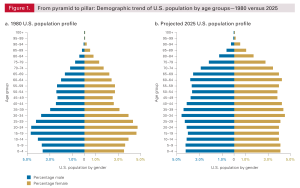 This dynamic towards an older average age and less wage-producers and lower overall consumption has led economists to be concerned that our economic fate is more similar to Japan than not. In contrast to this, Vanguard’s research group submits that this relationship may not be in place after-all, and that stocks may not be destined to poor returns (at least not for these reasons).

The authors cited three reasons they did not believe this to be the case:

The research provides a compelling case towards breaking this perceived relationship, but I might add additional observations from this research and similar studies.

It’s clear the same approach for a wide variety of problems ahead hasn’t changed. A portfolio that takes market risks gets market returns. You can diversify away most other risks, and at least now you have a compelling case for one less thing to worry about.

Note: The Economist and the National Bureau of Economic Research, among others, have also previously addressed this question. See the links for further details.

William founded Callahan Financial Planning and previously served as President of the firm.