Perseverance and spirit have done wonders in all ages. – General George Washington

Have you read David McCullough’s book 1776?  If you haven’t, you might not find a better addition to your summer reading list – particularly over this long holiday weekend.  First published in 2005, it’s an entertaining must read not only for its historical recounting of our nation’s first year, but for its lessons in courage and perseverance.

For today’s investors, the book is a reminder of the old saying, “that which is well achieved is usually well earned!”

Most Americans, 237 years later, don’t have a clear understanding of how great the odds were against the cause of American independence.  How, if any number of factors – including the weather – had turned out differently, our nation might have been stillborn.  How, a relatively small group of people through dogged determination and unimaginable suffering won the day – or in this case the year –when all of civilized society thought defeat a foregone conclusion. 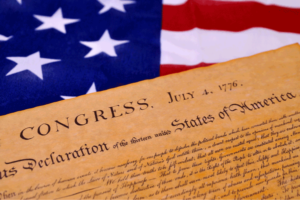 Throughout the book, McCullough brings to life the people and events that led to the miraculous survival of Washington’s rag-tag army – mostly a bunch of farmers – against the world’s greatest military force.  During that momentous year, what we call the Colonial Army was beset by desertion, malnutrition, rampant disease and constant supply shortfall.  Many, many died!

Washington himself, while unflappable in public and in front of his men, expressed his own doubts in a letter to his Mount Vernon caretaker in January, 1776.  “The reflection upon my situation and that of this army produces many an uneasy hour when all around me are wrapped in sleep.  Few people know the predicament we are in.”

Washington, however, was a man of resolve and the men who had stayed with him into the winter of 1776 must have been too.  Their ingenuity, daring and perseverance were finally rewarded. While the war lasted for many more years, the victory at Trenton and the young nation’s survival in 1776 demonstrated the tide had turned.

If you’ve been an investor over the last ten years, you might be able to relate in some ways to Washington and his small group of Patriots in 1776.  You’ve been tested by low savings rates, market volatility, unemployment, unpredictable gains and losses, crisis’s in our financial system, troubled European markets, and on and on.  But time moves on, and if there is anything to learn it is that our best odds come from resolve and determination.

We believe that same perspective was present and necessary in 1776, and for all successful investors and stewards of personal finance as well.

Callahan Financial Planning is an independent fiduciary financial advisory firm, providing planning on a fee-only basis, without sales commissions, with offices in San Rafael, San Francisco, and Mill Valley in Northern California, in Omaha and Lincoln in Nebraska, and in the Denver metro area in Centennial Colorado.